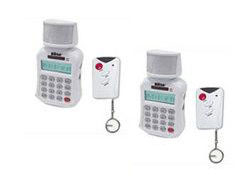 This is an Home / Office / Showroom security alarm system which has an PIR sensor or Motion Detector and Additional Magnetic Sensors. While going out, you may ARM the system . In armed state when it detects motion in the area , It raises an alarm & dials predefined stored telephone numbers ( Upto 5 Mobile or Landline numbers can be stored ). It can dial silently also without letting the intruder know that the owner has been informed . Also it has an Panic switch button which can be used by elderly or children in case of emergency. On press of panic switch the unit will give alarm and Dial the stored numbers.The Dialer can be Landline based or GSM SIM Card based. Completely Wireless, it is very easy to install and can be setup by a Layman also.

Calling Alarm System is available in only 7000/- Rs.